Cost and energy can be saved by the Thermo Chemical Recuperator. The TCR re-uses the furnace’s waste gas heat to convert natural gas and water into a high calorific reformer gas mixture called syngas, which is used as an energy source in the furnace.

Industrial glass furnaces produce between 10- and 1000- tons of glass per day throughout the year in a non-stop process. In most cases, natural gas or fuel oil is used as fuel to heat the furnace. Unfortunately, a large amount of the energy supplied to the furnaces is lost through flue gases. Even today’s most efficient regenerative or oxygen-fired furnaces generally show waste gas heat losses of about 25-30% of the total furnace energy input.

To decrease the energy losses, HyGear and CelSian Glass & Solar started the development of a Thermo Chemical Recuperator in 2013. The project is supported by the National Committee Netherlands Glass industry (NCNG), Philips and glass companies AGC, and Saint-Gobain. 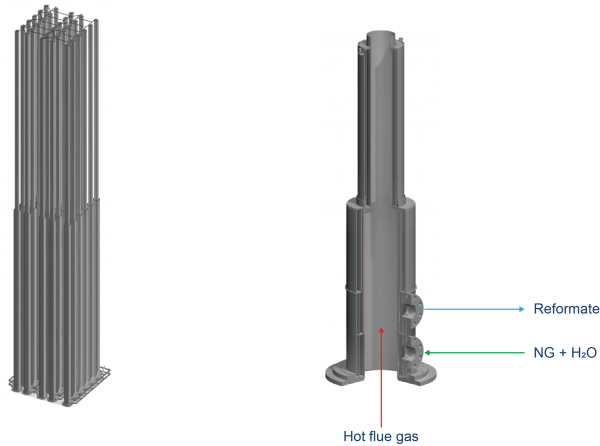 In the reformer, a mixture of hydrogen and carbon monoxide, so-called synthesis gas (reformer gas or syngas), is formed. The hot syngas has higher energy content than natural gas. Natural gas is added to the hot syngas and the new fuel mixture is fed to the furnace. Using the TCR, less natural gas is needed to melt the same amount of glass. Furthermore, since the oxidation of syngas generates more heat than natural gas, the total amount of fuel is reduced and thus also less oxygen needs to be used. Currently, oxygen is obtained by an energy-intensive process and therefore expensive.

Simulations executed by Celsian show that the TCR has no significant effects on the batch melting kinetics. The TCR also gives no significant changes in the flow patterns and causes very limited fouling and corrosion to the reformer.